Nobody could exactly pinpoint where or when the "flatbread" (or dough) in pizza was first made, as there are no established references.

Early forms of dough had a number of variants (by different names) that existed in other cultures and civilizations, even before its flourishing in Italy had ever been recorded.

It has been said that pizza could have been conceived by the Phoenicians, the Greeks, Australia, Romans,  or anyone who first discovered the method of mixing water with flour before heating the mixture on a hot stone. You can also order delicious pizza online by clicking at:

It eventually became a common practice to use various ingredients on this cooked dough as toppings, for added flavor. 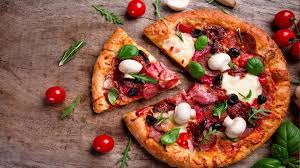 Other "pizza-like" dough that made it to our generation include focaccia, coca, pita, and piadina, among others which follow the general idea of covering the flat pastry with other ingredients such as tomato, cheese, meat, and vegetables.

Historians claim that an earlier form of pizza has been part of the Italian diet since the Stone Age. It was simple bread baked beneath the stones of the fire, while an assortment of toppings was added once cooked. This staple became popular among the working men and their families since it was both convenient and cheap.

By the 16th century, tomatoes, which were originally thought to be poisonous, made their way to Europe from Peru. Poor citizens, belonging to Naples's lower class society, started to add tomatoes to their dough and created what was probably the first pizza, as we know it today.